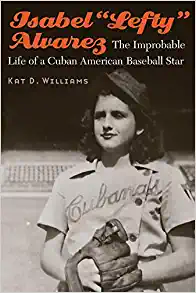 "Kat D. Williams traces Isabel “Lefty” Alvarez’s life from her childhood in Cuba, where she played baseball with the boys on the streets of El Cerro, to her reinvention as a professional baseball player and American citizen. Isabel “Lefty” Alvarez gives the reader a look into Alvarez’s young life in Cuba during the turbulent years leading up to Castro’s revolution, as political differences tore families apart. Alvarez came to the United States at fifteen, speaking no English, and experienced the challenge of immigration as her mother pushed her to become a professional athlete in her newly adopted country.

Through all the changes and upheaval, Alvarez found acceptance and success as a player in the All-American Girls Professional Baseball League, where she was called “the Rascal of El Cerro.” After the league ended, Alvarez struggled with an undiagnosed learning disability that limited her options. She persevered and reinvented herself as a factory worker but later battled alcoholism and depression until baseball returned to her life and she was able to reconnect with her former teammates and become part of the active community of former players.

Alvarez’s life story illustrates the struggle and strength of a young Latina immigrant and the importance of sport to her transition to her new country and her enduring identity." Amazon